December 6, 2018: an article about methane leaks from natural gas operations

A Drexel University professor named Peter DeCarlo wrote an article outlining the problems created by the methane leaks which occur due to natural gas operations, and the urgent need to identify the sources of those leaks and then to eliminate them. The article is entitled Your View: Why it’s important to curtail methane leaks from natural gas production, and if you’d like to read it, just click on that title.

In late September, VeRSE submitted a set of 5 questions to the 2 candidates for NY Congressional District 22. Anthony Brindisi’s staff provided us with his answers, whereas Claudia Tenney’s staff was unable to do so.

Here are the 5 questions, and Anthony Brindisi’s answers:

Renewable energy is a fast-growing sector. Solar panel installations have surged in the last decade, and there’s no reason our region shouldn’t be participating in this boom. Framing green energy production as a direct conflict with job creation is mistaken. In fact, a new report showed that nearly 3.2 million Americans were working in wind, solar, energy efficiency, and other clean energy jobs in 2017, outnumbering fossil fuel jobs 3 to 1. In the Assembly, I championed an initiative to increase Career and Technical Education training in high schools, preparing students for new in-demand jobs in the trades. These skills could certainly be put to use in the renewable energy sector, and in Congress I would look for other ways that we can incentivize clean energy job creation.

I won’t support expanding fracking unless the science supports that it is safe. Similarly, I believe that the methods for transporting natural gas through our area need to prioritize safety to prevent the risk of spills and damaged property. Construction of any new pipelines needs to follow a rigorous process that takes into account any environmental effects that may occur and fairly compensate land owners.

Like all big problems, we can’t simply spend our way towards a cleaner environment and improved public health. A comprehensive approach that involves smarter policy, targeted spending increases, and an efficient allocation of resources is the best way to tackle these problems. For example, infrastructure is one area where increased public spending could have a major impact. Upstate New York’s electrical infrastructure needs serious improvements to handle new clean energy technology, and its water infrastructure is dangerously old, causing risks to public health. But there are other areas – like rules governing emissions standards and proper disposal of chemicals – where policy and rule changes are what’s needed to protect our environment and public health.

As the husband of a biologist who teaches at Mohawk Community College, I know firsthand how important science and our region’s universities are. Climate change is a rare issue where the scientific community is in nearly complete agreement about its causes. Our political leaders need to respect this consensus and involve the scientific community in policymaking decisions to address climate change.

VeRSE published the following “Did You Know” ad in the Wednesday, 9/12/18, issue of the Vestal Town Crier:

For the November 2017 election, VeRSE prepared a short set of questions for town board candidates, and two of them – John Fletcher and Shoba Agneshwar – provided answers before the election, which we than published in the Vestal Town Crier. The third candidate – Suzanne Messina – was unable to provide answers.

These were the questions:

To see a copy of these questions and the two candidate’s answers, click here.

Suzanne was reelected, and John was elected to replace Shoba. We at VeRSE do not assert that our candidate Q&A had any impact on the results, as we have no way of measuring how it might have affected the vote, if at all.

For that same election, we also ran the following “Did You Know” ad to encourage Vestal voters to cast a ballot and make their voice heard. 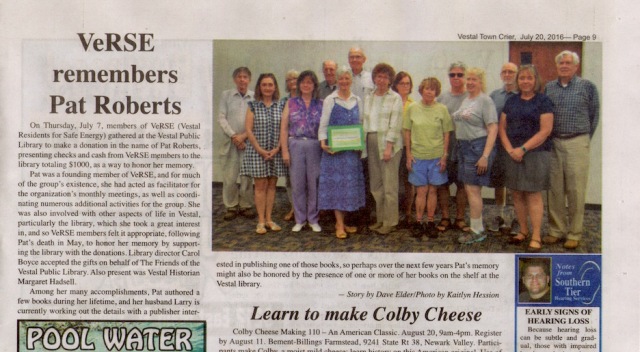 Presentation to the Vestal Public Library, in honor of Pat Roberts

This morning, members of VeRSE gathered at the Vestal Public Library to make donations in the name of Pat Roberts, presenting checks and cash from VeRSE members to the library totaling $1000, as a way to honor her memory. Pat was a founding member of VeRSE, and for much of the group’s existence, she had acted as facilitator for the organization’s monthly meetings, as well as coordinating numerous additional activities for the group. She was also involved with other aspects of life in Vestal, particularly the library, which she took a great interest in, and so VeRSE members felt it appropriate, following Pat’s death in May, to honor her memory by supporting the library with the donations. Library director Carol Boyce accepted the gifts on behalf of The Friends of the Vestal Public Library.

Among her many accomplishments, Pat authored a few books during her lifetime, and her husband Larry is currently working out the details with a publisher interested in publishing one of those books, so perhaps over the next few years Pat’s memory might also be honored by the presence of one or more of her books on the shelf at the Vestal library.

Previous “Did You Know” ads published in the Vestal Town Crier

The fight against fracking in NYS moved into a new phase in December of 2014, when Governor Cuomo wisely decided to ban fracking in the state. That decision shifted the focus of the struggle away from drilling and onto petrochemical transportation infrastructure, primarily in the form of pipelines and compressor stations.

In New York State, 3 major pipeline system proposals had emerged, but on Thursday, 4/21/16, builder Kinder-Morgan announced that it was suspending its proposed NED project. The following day, 4/22/16 (Earth Day), NYS DEC announced that it was denying the 401 Water Quality permit that the proposed Constitution pipeline would need before construction could begin, thereby essentially halting that venture. Currently, only 1 possible new NG pipeline monster (AIM) still threatens NYS residents, but it carries the biggest threat of all.

1) The Constitution Pipeline project had been planned to run from Susquehanna County, PA, through Broome, Chenango, Delaware and Schoharie Counties in NYS, up to Wright, NY, where it would have connected to other existing pipelines, moving the gas to an LNG terminal in Nova Scotia, where it could have been exported.

2) The Northeast Energy Direct (NED) Pipeline Project had also been planned to run from Susquehanna County, PA, through Broome, Delaware and Schoharie Counties in NYS, up to Wright, NY, and from there it would have run east to Dracut, MA, which is near the Atlantic coast. In Dracut, the pipeline would have joined with the Maritimes and Northeast Pipeline, which stretches northward to the LNG facility in Nova Scotia.

3) The Algonquin Incremental Market Pipeline project (AIM) would run from central New Jersey, crossing NYS through Rockland, Westchester and Putnam Counties, and then go on through Connecticut to terminal points in Rhode Island and Massachusetts, plus it also would make the connection at Dracut, all for the purpose of exporting the NG.

With the NED and Constitution pipeline projects now beaten, the AIM venture remains as the only new NG pipeline proposal in NYS, but it carries the greatest risk of all, having been designed to pass dangerously close to the Indian Point nuclear power plant. Governor Cuomo recently made a request to Spectra, the pipeline builder, asking the company to halt the undertaking so that an independent review could assess the risks related to this project’s proximity with the Indian Point facility, but the petrochemical company refused his request, making it quite plain that it only cares about its own profits, and does not give any consideration to the safety of NYS residents or Governor Cuomo’s concerns about how their venture might threaten that safety. If the testimony of 2 former inspectors on the project can be believed, Spectra also doesn’t care about the safety of its own employees, or the integrity of the resulting structure.